One sunny afternoon in the Autumn of 2006 I was painting in my studio (a.k.a. kitchen) when two doves alighted on the narrow ledge outside my window and began cooing.  I had lived in this city apartment for several years and this never happened before so I was curious. I observed them as they observed me.  They flew away after a while so I put some bread crumbs out on the ledge to see if they would come back the next day.  To my delight they did and made short work of the crumbs.  They returned each afternoon and I quickly ran out of crumbs.  So off to the pet supply store I went and purchased birdseed.  Not only did the two doves return, they brought several friends and relatives.  They began appearing in the morning as well so I distributed seeds early and late.

At first the doves all looked alike to me.  But as I continued to observe them, I became aware of their individual feather patterns and personalities.  One had more white tail feathers than the others.  Another had darker banding around the neck.  Some were rather aggressive and others waited their turn.  One young male was more interested in what was going on inside my apartment than eating the seeds.  He routinely hopped on the back of another bird and peered in to see what I was doing. One afternoon as I was in the kitchen (a.k.a. studio) preparing a chicken for roasting, they all simultaneously stopped eating and gave me the evil eye!  “Don’t worry”, I assured them, “You are not on the menu.”

I wondered who was training whom!  Was I teaching them to eat seeds on the window ledge or were they schooling me to provide a daily bird buffet?  Sometimes I would have as many as 30 doves all vying for position on the ledge, fighting over the seeds (very un-dove-like behaviour!). Occasionally there was so much wing-flapping and flying feathers I was forced to intercede and send the offenders to separate corners.

During the Winter, if I wasn’t in the kitchen early enough in the morning offering seeds, they would sit on the ledge and nearby telephone lines making all sorts of noise, demanding their breakfast.  Some even began to tap their beaks on the window! They watched from the lines as I dusted the snow off of the ledge and then swooped in for their meal.

In the Spring several juncos and starlings visited and I was learning to recognize newcomers by their different calls. A few dozen sparrows began to sit on the lines and boldly challenged the doves for their share of seeds.  Strangely enough, the doves would give way to the sparrows but not to each other.  A male and female cardinal dropped by a few times; rather rare in that neighborhood.   A blue jay couple and even a woodpecker made a few appearances, also extremely rare. 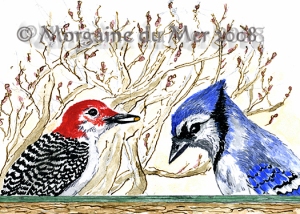 In the Summer I grew herbs on the inside of the windowsill and the birds watched with interest.  My avian friends never failed to make me smile; a great way to start the day.  I really missed them when I moved away and felt bad that no one would feed them.