Heavy rain and wild wind slashed at the coach as it rumbled along the road. Though freezing and soaked to the skin, the Coachman’s masterful driving kept the carriage from overturning.  A tremendous clap of thunder and a bolt of lightning that lit the night sky frightened the horses into a mad run. Quickly regaining control, the Coachman braked to a stop.  Climbing down from his seat, he could hear cursing as his employer rapped his walking stick against the roof of the coach.

“Damn it, man! Why are we stopped?” Lord Miserton demanded.

“Begging your pardon, My Lord,” the Coachman said speaking through the carriage window. He dared not get inside and so stood in the pouring rain trying to explain.  “The horses are afeared.  We will not reach Miserton Hall in one piece if we continue in this storm.  It would be best to wait here until the storm abates.”

“Wait?!” shrieked Lady Miserton.  “Do not be absurd!  Impudent man, afraid of a little rain.”

Lord Miserton let loose another string of curses. “You shall be sacked upon our return home if you do not find us a proper inn to stay the night!”

The Coachman paused before answering, “My Lord, if we turn left at the next crossroads there is a place that may have accommodations.”

“Then take us there at once!” ordered Lord Miserton shutting the carriage window.  “Remind me to sack him anyway,” he muttered to his wife.

Turning left at the crossroads the Coachman headed toward a high hill upon which stood a fortress glowing eerie white in the darkness. A few skeletal trees clung to the sides of the barren hill.  The Coachman expertly guided the horses up the steep incline and stopped before the front gate. It unbolted immediately as if the company had been expected.  He jumped down to open the carriage door. 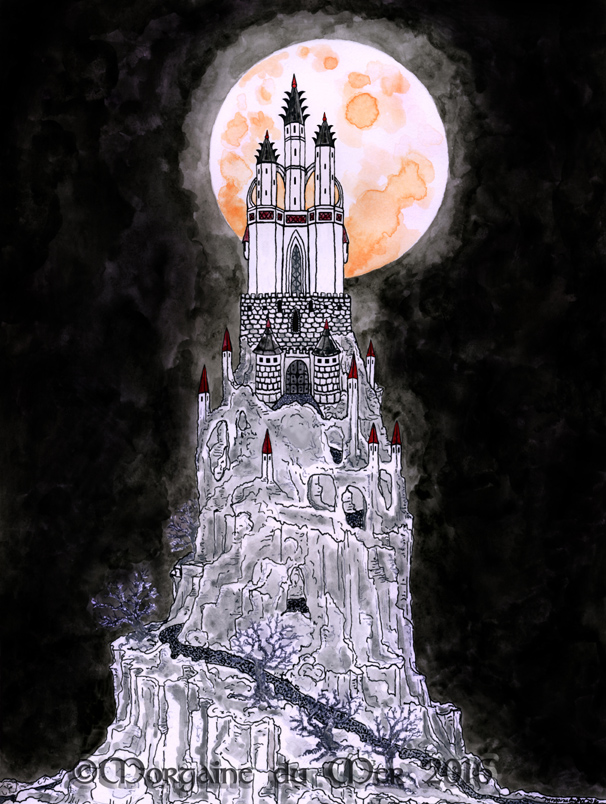 “Where are we?” Lord Miserton shouted.

“My Lord, this is the home of Viscount Sanguis.  He has been known to take in stranded travellers.”

“Never heard of him! Get us inside this instant!”

The Coachman showed Lord and Lady Miserton through the open door where they were greeted by an ancient female servant.  “Follow me,” she croaked and led them inside.

A tall spectral man appeared, seemingly out of thin air.  “Ah, visitors.  Welcome, I am Dywyll Sanguis.  My housekeeper will make you comfortable by the fire.”

When the visitors were out of sight, Viscount Sanguis turned to the Coachman and handed him a small black velvet bag heavy with gold coins.  “Thank you, sir,” he whispered.  “I shall drink well tonight.”

The Coachman smiled, tipped his hat and went back out into the night.  The storm had ceased and an unusual orange full moon lit the sky.

Lord and Lady Miserton were never seen again.  Although the bodies of a man and woman were found at the crossroads; dressed in rags, puncture wounds on their necks and drained of all blood.