The Gnome and I; Adventures in First-Time Home Ownership

Episode 1-My Momentous Meeting with Henri, the Gnome

This story begins in 2010 when I created a drawing of a Gnome Home.  I’ve always liked gnomes.  I had a smiling and waving acquaintance with the three who resided in the landlord’s garden.

Little did I know when posting this picture on my website, a gnome several hours away was perusing the internet in search of a home. (Yes, some gnomes are rather tech-savvy.)

Fast forward to Summer 2014: At last I was able to leave the land of ramshackle rentals and I went in search of my new abode. Being half-mermaid the logical location was a home on the coast. I knew my first choice, a castle by the sea (dragon included), was completely out of the question.

So I looked for a house by the sea; preferably Victorian in style. No, definitely not affordable. 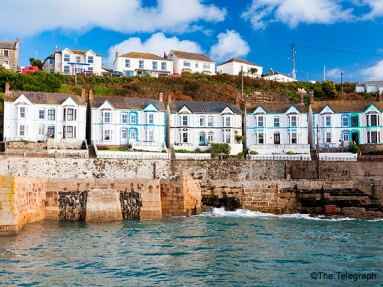 Cottage by the sea? Still out of my price range. 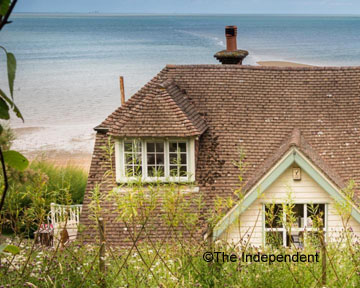 Hovel descending into the sea?!  Not even that was in my budget!

It quickly dawned on me I was going about it all wrong by searching only in my preferred area.  So I sought homes within my price range, none of which were located by the sea. (Sigh, mermaid tears)  So inland I went.  I found a cottage in a small town I never heard of; three hours as the gull flies from the sea.  Not a mermaid’s dream location although it was home to a curious flock of gulls who frequented a large carpark on the main road.  The cottage appeared to be in decent shape.  As the real estate agent pointed out the supposed positive attributes, I investigated for negative energies.  I detected none, so I took a leap of faith and purchased it; after paying for an inspection, of course.

[Rule 1-Have the property inspected! The  house I liked the best had too many expensive flaws so I kept looking.
Rule 2-Negotiate!  If the inspection isn’t 100% calculate the costs to fix and offer less than the asking price.  The seller flatly declined my offer but 20 minutes later saw reason and accepted.
Rule 3-Expect the unexpected!] 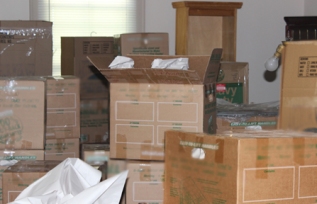 Two weeks after I had moved in, still trying to make order from chaos, I heard a tapping on the front door.  I waded through the sea of boxes (no mermaid pun intended) and found myself knee to face with a gnome.  My gknowledge of Gnomish is gnegligible and he didn’t appear to know many English words.  He produced a print of the aforementioned gnome home.  I deduced he had come in search of the home depicted in my drawing.  I tried to explain the illustration was merely a figment of my imagination. His hopeful countenance was now downcast. 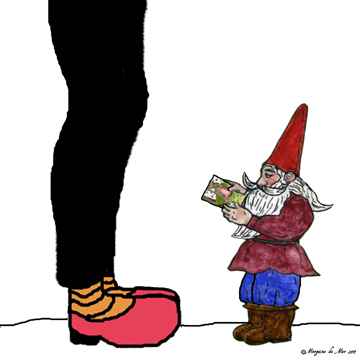 I invited him in and he looked about the disarray in dismay.  He pointed to a scrap of packing paper and a produced a pencil from his knapsack. He wrote a series of words; some Gnomish, others in French and English, ending with a question mark.

I deciphered his question thus: ‘Are you the Queen of this castle?’ I thought for a moment, then nodded my head in the affirmative.  As a descendant of Melusina, I am half-mermaid.  According to town records the official name of my little property is Sandringham Place. As Hyacinth Bucket was often heard to proclaim, “If not for an accident of birth, I could have been someone important.” (A lack of one letter, and small it may be; this property is ruled by me!)  Indeed, I was the Queen of this castle.

The gnome bowed with a flourish and introduced himself. “Madame, je suis Henri.” He bowed again and offered me a bar of chocolate. He apparently could understand English but preferred to speak French as  it was obvious I could not properly converse in Gnomish.  I don’t speak French either but he overlooked that failing.

I could tell by his dejected expression, he realised the gnome home he hoped to find here did not exist.  I could not turn him away so I stated if he intended to remain, he could serve as my butler. (I was rather enjoying the role of Queen.) His look of annoyance was profound.

An idea! I retrieved a chopstick from the kitchen, tapped him lightly on both shoulders and bestowed upon him the title of Queen’s Guard.  He smiled, bowed again and immediately assumed sentry position at the front door.  Frankly, I had little use for a guard; I needed help with unpacking.  But he stood his ground and refused to do any manual labour.

Henri accepted and/or ignored my idiosyncrasies as he should; I am Queen. As the days went by I became acquainted with his. Henri dislikes Chinese take-away; he prefers chocolate above all other foods. He often filches my chocolate despite having a large supply of his own.  (How he acquires it is anyone’s guess.) He will have his little pranks and enjoys hiding my shells and crystals, smiling innocently as I search the house to find them.  Laundry and house-cleaning he avoids at all costs. Although he had not mentioned it, I think he must have served in the Gnomish Gnavy as he is quite fond of dancing the hornpipe to all music.

Henri regards his position of Queen’s Guard with decorum and protocol.
“La Garde de la Reine ne s’implique pas dans le tri des articles pour le recyclage!”
(“The Queen’s Guard does not involve himself in sorting items for recycling!”) he stated unequivocally; sounding very much like the marvellous David Suchet in his role of Hercule Poirot.

Every now and then Henri would leave his post at the front door and march about, inspecting each room and taking notes. “Reconnaissance!” he explained in answer to my raised eyebrow. (I think he was looking for new places to hide my chocolate!)

The first time he saw the bathroom he roared with laughter. I found him upside down, shouting with glee, “Les années 1980 téléphonèrent. Ils veulent que leur luminaire retour!” (“The 1980s called; they want their light fixture back!”)

One day during his weekly inspections, he cried out from the bathroom with alarm, “Le ciel tombe!”