The Gnome and I: Adventures in First Time Home Ownership – Epsiode 4
Meeting the Neighbours

Luck of the draw, bad karma; all the places I had ever rented in cities were rife with noisy, inconsiderate neighbours.  Very much like the ones in the Rolling Stones song  https://www.youtube.com/watch?v=omGDmvNWLVw  of the same name.    If one is renting, one can move.  But as a homeowner, you are rather stuck with whomever owns the properties bordering yours.  So I was a bit apprehensive about meeting my neighbours here in the country.

Henri did a bit of covert spying but did not acquire any intel of value.  (He was of the opinion that the leaves he attached to his hat made good camouflage as well as a fashion statement.)

I had already experienced serious unfriendliness from the woman living at the property directly behind mine.  My several attempts at communicating had been soundly rebuffed so I wasn’t sure what else to expect.  I wasn’t too keen on meeting the ones with noisy dogs on the other side of my property.  I was pleasantly surprised by the couple directly next door.

I met Dan and Jane one sunny day as I was hanging the laundry on my newly installed clothesline.  They were a lovely, elderly couple who found me rather comical.  (Little did they know I was half-mermaid with a guard gnome.)

It seemed Henri was not the only one with keen powers of observation!
Dan and Jane remarked that I was the only one in the neighbourhood who hung laundry outside.  (I was living in the country. Air is clean and free; why waste money on an electric clothes dryer?)

I was spotted several times on the main road using my own shopping cart instead of a car.  (I don’t have a car.)

I wear my hair in braids like Pippi Longstocking. (Like other mermaids, my hair is waist-length and everywhere I went people commented on it.  Apparently ‘women of a certain age’ wear their hair short.   Not happening.)

One of their friends wondered if I belonged to a religious cult as most of my attire is black.  (I’m from the city; light-coloured clothing on public transportation does not fare well.  Should I be expecting a visit from Matthew Hopkins, Witchfinder General?)

They took it upon themselves to teach me about living in the country.  My clothes apparently ran the gamut from too elaborate to weird.  “Who knows?” I countered.  “I may become a fashion trendsetter!”
“No, people will just think you are a bit off”, they said.  (Well, it won’t be the first time and certainly won’t be the last.  Better to be labelled ‘strange’ rather than the village idiot.)

They thought it was hilarious that I locked my doors when I was merely going next door to their house.  In the city we locked the doors at all times.  I once lived in a building in which we locked our doors to go down the corridor to deposit rubbish in the chute. The place was routinely burgled so precaution was necessary.

When I visited Dan and Jane, I rang the bell and waited to be invited in.  They insisted I should walk right in, whenever.  (Other than Kramer, who routinely burst into Jerry Seinfeld’s apartment, I had never known a visitor to enter someone’s space in the city without knocking .)

They were amazed that I had gotten rid of the screen door in the front and had the contractor install an iron security door.  He had never heard of a security door.  My front door, original to the house, is all glass panes and thin wood.  Perhaps I watch too many crime dramas and read too many murder mysteries.  But I knew if I, a person with no criminal experience, could break in less than 30 seconds; so could a burglar. I also had him put security bars on the windows in the basement and the back door.  Apparently another first.  Which led Dan and Jane to believe I was safeguarding a fortune until I explained I had never lived on the ground floor on my own.  Now when I heard strange sounds in the night, I was confident it was not burglars.  (Just wild animals, ghosts or a wayward werewolf.)

Dan showed me how to use some hand tools so I could fix things myself and gave me all sorts of tips. Such as rolling the garden hose up after use and keeping it off the concrete step so it would last longer.  Jane had an array of talents that included sewing, painting and baking.  She often sent over home-made treats.

Dan and Jane became real friends for which I was very grateful.  They were in poor health so if heavy things needed lifting or they wanted assistance with anything I was happy to do so.  They were kind enough to show me some of the surrounding countryside.  We went to a nearby apple orchard and to some farm stands for fresh vegetables.  I could never work out where we were as all the country roads looked the same to me, which always gave Dan a chuckle.  If they had errands to run they asked if I wanted to tag along and we often went grocery shopping.

When the I invited them over to see how I was progressing with the house, Henri hid in a cupboard. 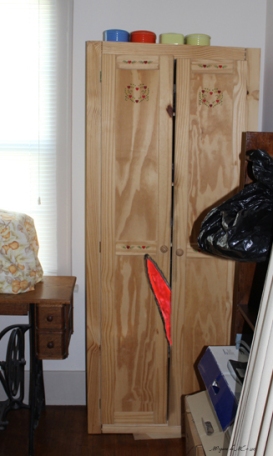