Rearranging the furniture (again) and a Visitor

To read from the beginning click here: The Gnome and I

[Another phrase to watch out for when looking for a home is ‘location, location, location’.  The real estate agent repeated over and over about how great the location was.  Yes, the house is within walking distance to several shops and I do not own a car.  But the house is located on what appeared to me to be a two-lane country road.  It turned out to be one of the busiest roads in the county of which I am sure she was aware.  I was envisioning bucolic peace and quiet.  Instead, vehicles of every size and description drive by my house 24/7.  I have yet to see an army tank but would not be surprised if one passed by.]

November was cold and rainy; perfect for staying indoors.  So I had no excuse for not finishing the seemingly never-ending unpacking.  The house has two bedrooms; one of which I planned to be my studio/craft room.  I thought I had things arranged.  (Famous last words!)  Necessity made me switch bedrooms.  I had originally chosen the bedroom on the west side of the house as it was a bit larger.  However, the one on the east side was slightly more quiet; farther away from the barking dogs and traffic.

This meant moving all the furniture and unpacked boxes from one room to the other through the narrow hallway by myself.  I moved my solid oak Edwardian bedroom set which included a very tall armoire from one side of the house to the other. Henri was suitably impressed.  Of course, he supervised but moved nothing.

My new sofa and rug had finally arrived for the parlour. 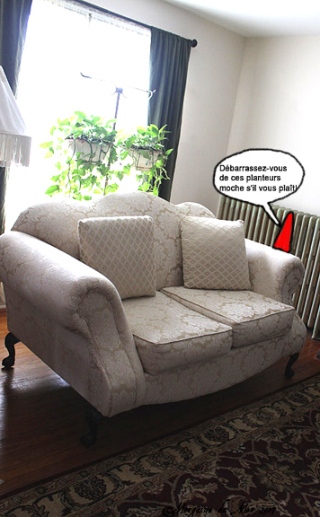 (Translation:  Henri:  “Get rid of those ugly planters, please!”)
(Me:  “Been reading Better Gnomes and Gardens again?”)

One evening as I was watching television I saw something move next to the computer armoire.  I got up to investigate and was greeted by a mouse.  A tiny black and brown mouse which froze in its tracks.  We stared at each other and then it ran back behind the armoire.  As there had been mice in the city rental, I was not too surprised to find them in the country.  I expect it took a wrong turn and ended up in the house.

This gave me an idea in the event the mouse returned! 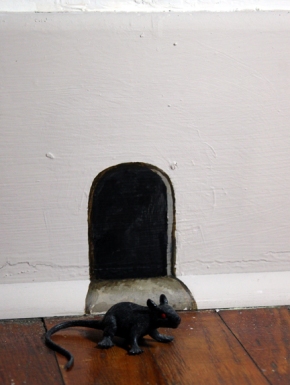 I didn’t see the mouse again until the spring.  It had grown four times in size and ran through the kitchen to the basement.  How it squeezed itself under the basement door was astonishing!