To read from the beginning click here: The Gnome and I

November arrived and with it, cold and snow.  So now was the perfect opportunity to unpack everything and get organised.  No excuses!  Henri supervised, as usual, and soon practically every box was empty.  I was able to fit all my china and teapot collection in the cupboards.  A first!  Some of my things had been packed away for years.  In the small rental, there was very little opportunity to rearrange the furniture.  Here I could rearrange the furniture as often as I wished.  (Too often, in Henri’s opinion!)

“Where is my favourite cup?”

One day Henri had enough of all the chaotic rearranging and went outside.  About 10 minutes later I heard muffled cries of “Aidez-moi!” (Help me!)  I went to investigate and found Henri trapped in a snowdrift!  After I pulled him free, he sheepishly followed me back into the house and helped me unpack the last few boxes.

December brought quite a bit of snow.  As a renter I never shovelled snow.  Now that I was a grand property owner the job of snow removal was mine.  With one snowstorm after another it was becoming difficult to keep the path in front of my house clean.

One morning, after another heavy snowstorm, I heard the sounds of boots and singing.   Henri had enlisted the help of his friends who were visiting from Greenland and they were clearing the path.  No silly dwarf songs for them!  Bohemian Rhapsody* in 9 part harmony! 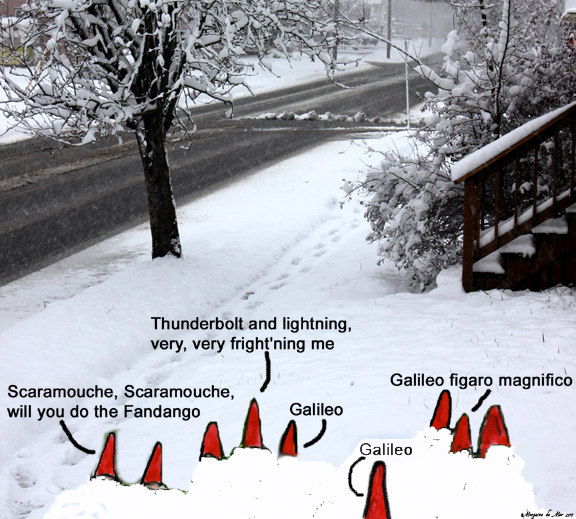 Winter Solstice arrived.  Henri and I hosted a lavish dinner for the Greenlandish gnomes.  2014 came to a close.  I was finally settled in.   Until the following Autumn, when much to Henri’s dismay, I brought all the things from the storage unit and began unpacking and rearranging all over again!